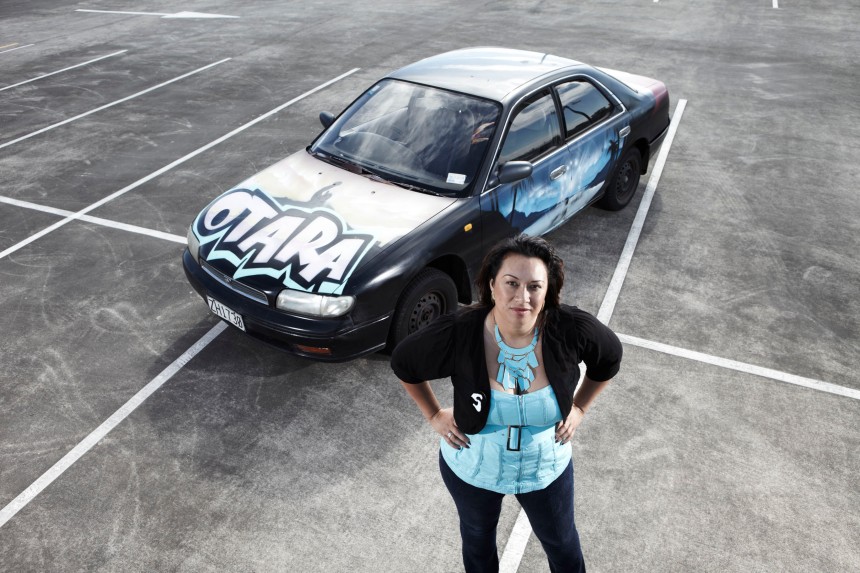 If you can tell a lot about a person from what they drive, Leilani Kake’s car is a firm salute to her neighbourhood, her starting point… her foundations.

In 2011, Leilani offered her beat-up Nissan Bluebird to be painted for an event at Fresh Gallery Otara. Mangere-based graffiti artist, Monty Collins, responded to her ideas for the design with a bold assertive ‘OTARA’ on the bonnet and two matching dusky vistas on each side. In addition to Collins’ signature moody sky-scape framed with silhouettes of palm trees, 15 stars representing Leilani’s Cook Islands heritage emerge centrally from the watery horizon line. The boot is emblazoned with a strong, proud Tino Rangatiratanga flag.

From all sides, Leilani represents her ancestry and identity. Whilst she might be viewed from one angle initially, she soon reveals the medley of orientations, perspectives and worldviews that make up her position and conviction as an artist and educator.

Like her car, Leilani’s art practice has become over the past few years, memorable for its strong endorsement of South Auckland and a new insight into diverse Māori-Pacific experience within the New Zealand arts landscape. She has exhibited both nationally and internationally and presented invitational lectures and performances in California and Hawai’i.

Leilani started her formal art education at Manukau School of Visual Arts in Otara and went on to complete a Master of Fine Arts degree at the University of Auckland. In 2010, she started teaching Contextual Studies at MIT Faculty of Creative Arts. As an alumna she had an immediate ease with the students and the teaching environment. Her locally grown empathy for where art sits / fits within the context of living in South Auckland lead to the formation of the Māori and Pacific student support network, Ngati Arty. In a comfortable and empowering environment, students are encouraged to engage with exhibitions and galleries, ask questions and feel confident about their voices and articulating their positions on art.

In a partnership with the 2012 South Auckland Pacific Arts Summit, Leilani lead the popular event series, Hump Day Art Talks. In three weekly dialogue events open to the public, Pacific thinkers were invited to present talks on topics such as art and society, criticism, diplomacy and tips and tricks in the art world. Ngati Arty hosted the events with songs and performances, hand-made garlands and heartfelt hospitality. Leilani’s agenda to give the students an opportunity to hear from Pacific Island thinkers, artists and academics outside of their curriculum was clearly evident and well received by broad audiences.

For Leilani, empowering Māori and Pacific youth in South Auckland is an instinctive drive. Asked recently what the highlight of exhibiting in Auckland Art Gallery’s landmark Pacific art exhibition, Home AKL was, Leilani noted a visit by students from Otara’s Hillary College. The idea that they could travel almost 20 kilometres from suburban Otara to Auckland’s cosmopolitan civic art gallery and see a work made in Otara was a notable measure of success.

Leilani has for the past eight years been making and presenting her work in South Auckland drawing inspiration and strength from her lived cultural experience, her environment and family. She has become a major figure in the community of contemporary artists articulating South Auckland experience in dynamic new art languages.

Working in the medium of moving image and video, Leilani’s lens mirrors and reflects the people and events in her life in a way that is sometimes confronting and always realistic. Those she records are collaborators in her process and become stakeholders in the consideration of the work’s presentation.

Working relationships could not be more personal. Leilani makes work about relationships that will last her life time and beyond. Her work documents milestones and junctures where families change. Her video installation, Ariki (2007) [above] was the first work of series documenting the development and influences affecting her son, Andre’s life. In 2008, Leilani moved from a staged performance based approach to real-life documentary with her three-channel video installation, Tino Rangatira Tanga, a moving tribute to her late father, Richard Kake.

Both works were premiered at Fresh Gallery Otara and went on to be shown in different configurations at other venues with varying success.

Leilani produces approximately one work a year. When this statistic is scrutinised, she stresses the copious amount of thinking, planning and re-thinking that goes into a single work and that, being a working Mum, the reality is that making art is a luxury. In her most complex technical work to date, Ngā Hau E Whā – The Four Winds (2011), two of the four subjects were flown into the country for the performance component, a scaffolding company was engaged as a sponsor, and a local swimming pool and eight-person team was assembled for the filming. The presentation required a computer programmer, four short-throw projectors and a completely blacked out room.

Inspired by the disproportionate statistics of preventable cancers amongst Māori and Pacific women, the work invited viewers to consider attitudes towards the Pacific female body, nudity and privacy. It was created for the 2011 Auckland Arts Festival and its sophisticated blend of social consciousness and site specific visual language effectively secured Fresh Gallery Otara’s position as a key player in the Auckland arts scene. Notably, Ngā Hau E Whā – The Four Winds was a significant project generating support from Creative New Zealand, MIT Faculty of Creative Arts and Toi o Manukau and was also the first show to attract a Fresh Gallery Otara review in the New Zealand Herald.

Leilani’s work facilitates insights into intimate and privileged spaces. For those who engage with those spaces, the work functions to empower and validate; they heighten the cultural currency of these shared experiences. For those looking in from the outside, Leilani’s lens is a portal into a first-hand experience.

In media interviews, Leilani reiterates that many of her works have been inspired by personal events; she has recorded them within her role as a family documenter, but an artistic outcome is largely not the impetus for her documentation. When artworks are created from these records, exhibitions present an opportunity to educate outsiders about the complexities of indigenous and Pacific Island experience in Aotearoa.

However, in her latest work, Leilani creates an intentional insight into a facet of her son Andre’s Cook Islands hair cutting ceremony that took place at Ōtāhuhu Town Hall Community Centre. In The Hair Cutting (2012), a tight fixed frame shot centralises the subject; information about the event and the process is limited and the focus is on Andre’s experience, which is at times heavily emotional. The work effectively captures a lived moment between boyhood and manhood. Like many of Leilani’s works, The Hair Cutting displays a conscious awareness for the politics of the gaze. It is a safe and empowering insight into a private moment which is as culturally pronounced as it is universal.

For this reason, whilst Leilani’s work is at home in South Auckland, it loses little when exported. Curators have been drawn to the insight and intimacy her work offers. Having exhibited in Taiwan, San Francisco, Paris and Hawai’i, Leilani’s connectedness, familial relationships and conversations about life and death, transcend cultural contexts.

With aspirations to represent Aotearoa at the prestigious Venice Biennale, Leilani’s future goal of exhibiting at the Australian Centre for Moving Image (ACMI) in Melbourne feels like a conceivable step towards her goal.

And whilst acknowledging the struggles of defining Pacific Island and indigenous identity journeys within Eurocentric academic frameworks, Leilani is still driven to complete a Doctorate of Fine Arts in the near future.

In the meantime, she will continue to drive her pimped out Nissan Bluebird around the country, representing at all the time, from every angle.

This article was first published in SOUTH (Issue 2) produced by Toi o Manukau.