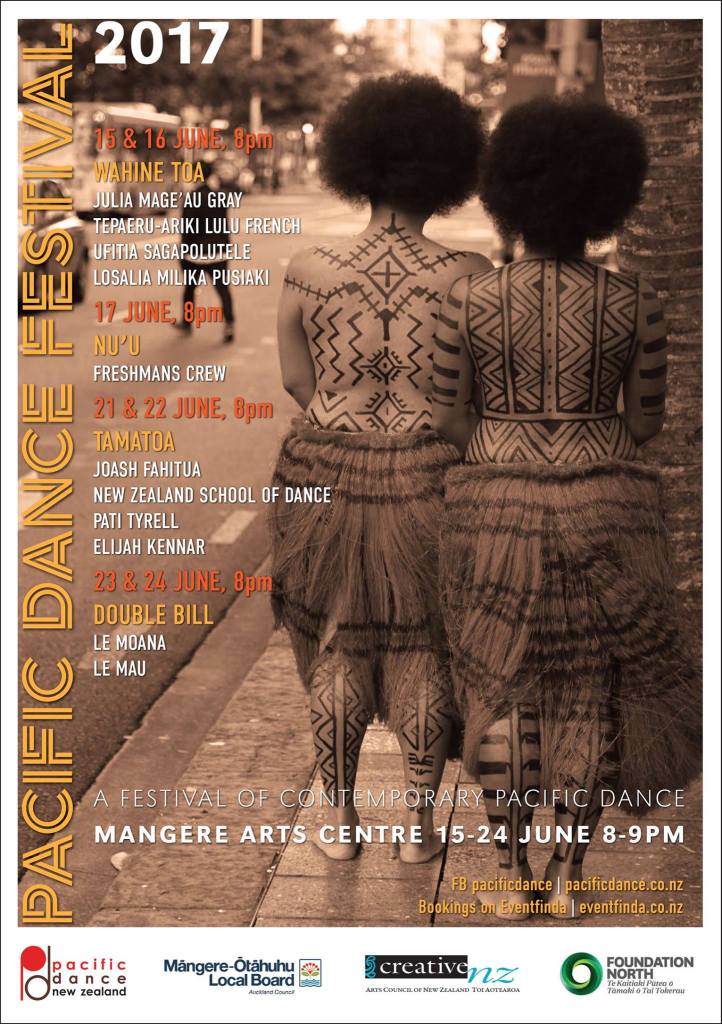 The poster, featuring an image by Julia Mage’au Gray, who features in the upcoming PIMPI Winter Series exhibition, Lovers Rock, reflects the refreshing regional diversity of this year’s programme. This image of the unique storied markings of Papua New Guinea tattoo on curving brown skin, juxtaposed against concrete and right-angles, is part of Mage’au Gray’s series, Mela out of context, made in response to her recent relocation from Darwin, Australia to Auckland.

The photographic element of Mage’au Gray’s practice was further explored in her choreographic work in the programme, Found Words. As a solo dance work, Mage’au Gray herself performed in response and harmony with a video projection of powerful stop-motion performances, and a moving audio track featuring the late, Dr Teresia Teaiwa reading her poetry, including her iconic, Fear of an Estuary…

Fear of an Estuary
By Teresia Teaiwa

But the wise one said I will not drown

The voice and presence of Teresia Teaiwa, who passed away suddenly and tragically earlier this year, was triggering of so many tears. I was left reflecting again on the deep impact Teresia made on the writing and thinking about Oceania and what a privilege it was to know her. I was left with salty tears, and Teresia’s words – We sweat and cry salt water, so we know that the ocean is really in our blood (Teresia Teaiwa, As quoted in Hauʻofa, Epeli. We are the Ocean: Selected Works. Honolulu: University of Hawaiʻi Press, 2008).

The large scale projection screen at Māngere Arts Centre was ideal to experience Ojeya Cruz Banks‘ short dance film, Tåno’ shot on location in Guåhan/Guam. Her words, representing a Chamorro and Micronesian perspective, and the solo dancer’s arching body in crackling, shady vegetation, with a tar seal highway and the ocean in the background, shot almost as if from the point of view of the forest, made this work mesmerising to watch.

Tai Akaki by Tepaeru-Ariki Lulu French evoked the ocean in beautiful, waves of movement and rhythm, deep hues of blue in lighting and textures. The work spoke to the urgency of rising sea levels and the connectedness of our Islands with a pan-Oceania vocabulary of movement.

The final performance of the night was a Tongan extravaganza! Choreographer, Losalio Milika Pusiaki, bought an intergenerational, feast of epic whole-community proportions! I loved it! All colour, no compromise on the length and presence of each component of the story. The men danced, the women danced, the children danced; the costumes from hair comb to ankle ornamentation were exquisite. There is no doubt, Tongans don’t do things by halves. I felt so close to this work, seeing traces of the relationship between Fiji and Tonga, in movement and regalia, in its truth and connectedness between past, present and future.

Thank you to Pacific Dance New Zealand; this opening night was uplifting, inspiring and moving. I’m not someone who engages much in the world of dance, but having this festival here in Manukau, South Auckland, and being able to support and share space with these brave creatives, dancers, storytellers and musicians, it means a lot.