I wrote a profile on Rebecca for Eyeline magazine in 2011, read it here. And read more about Body Rock here. 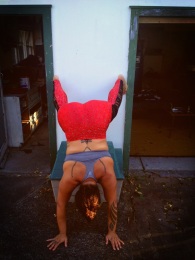 This is an ongoing project inspired by the #ExpressYourself social media campaign promoted by American DJ and producer, Diplo.

In an effort to create a contribution to the campaign’s ongoing afterlife, I collaborated with artist Leilani Kake to photograph each other upside-down-twerking at various South Auckland locations. The perceived sexualisation and physicality of our bodies viewed from this angle has inspired feedback that reflects a broad range of attitudes from shock and shame to empowered support.

I have long been interested in the politics of fat, of brown skin and the male gaze. I’m interested that this series of photographs confronts and disgusts some people and empowers others.

Whilst making these photographs, Leilani and I have discussed body confidence, spatial politics and South Auckland… the ‘colonised butt’. As an experimental project existing as part performance / part virtual, it has been refreshing and engaging. The #ExpressYourself campaign is an engagement strategy I’m interested to reflect and weave into future projects.